Confirmation of a section of visible gold assaying at over 78 ounces per tonne (2,430 g/t Au) demonstrates the high-grade potential of the Victorian Goldfields. The presence of four other intersections assaying greater than 3 ounces per tonne demonstrates this is not a ‘one hit wonder’ at Happy Valley. Happy Valley sits within a ~7km corridor of historic gold mines at Myrtleford and that is one of 5 distinct corridors of historic gold mines observed on our Myrtleford property.”

Analytical assay results have confirmed the tenor of visible gold and other mineralized zones identified in drill core from the first two diamond drill holes at the Happy Valley prospect. These results confirm the company’s belief that high-grade gold mineralization exists at depth below historic gold mining areas. The current program will generate structural, lithological, alteration and geochemical information to determine their relationship to gold mineralization at the Happy Valley Mining Centre. This information will provide a model for exploration along strike and broader model for the Company’s Myrtleford prospects.

The Happy Valley Prospect is situated in the south eastern portion of the Company’s Exploration Licence EL006724 in Victoria, Australia (Figure 4). It lies within a 7km long trend of historical workings. The Happy Valley Mining Centre has a documented historical production of 34,200 ounces of gold predominantly between 1866 – 1875. The Happy Valley Mining Centre produced at an average grade of ~31g/t Au, which presents E79 with an extremely attractive target. To date, only limited modern exploration has been conducted at this prospect.

Gold mineralization at Happy Valley occurs as quartz infill fractures and spurry formations within carbonate altered sedimentary units of Lower Ordovician age (448 – 443MA). Regionally mineralization appears to be proximal and related to the emplacement of several major regional Devonian age granitic plutons. The gold can occur as free particles within the quartz veins and can also be associated with sulphides, including pyrite and to lesser degrees arsenopyrite and galena.

Drill hole HDV003 was drilled at a dip of -55o, (16o steeper than HVD002), and on the same azimuth as HVD002 (216o mag, 228o Grid). The drill hole has intersected two zones of quartz containing both sulphides and coarse gold. All intersections represent downhole lengths and as such do not represent true width intersections. Historic mining operations were undertaken on subvertical steeply dipping quartz vein structures.

All samples are 1/2 HQ diameter (63.5mm) diamond drill core. Sampling was conducted to geological contacts. Samples were shipped by E79 contractors to ALS Global in Orange, NSW, Australia by DHL. The samples were crushed to a nominal 85% passing 3.15 mm. A 1 kg split was obtained using a Boyd rotary splitter and pulverized in its entirety to a nominal 85% <75 mm. A quartz wash was run through both the crushing and pulverizing equipment between all samples and sizing tests were performed on both the coarse crush and pulverized material. All samples were analysed by 50 g fire assay with an atomic absorption finish (Au-AA26). This method has an upper detection limit of 100 ppm. All samples were also analysed by a second fire assay using a reduced charge weight with an upper detection limit of 10,000 ppm (Au-OR1). Approximately 50% of the samples were analysed by three separate over-range fire assays to confirm reproducibility of the results. Over-range values from Au-AA26 were also re-run following dilution. Four certified reference materials (CRM) and nine coarse quartz blanks were also submitted with the samples to monitor accuracy and possible cross contamination, respectively. The results for all quality control samples lie within acceptable limits. 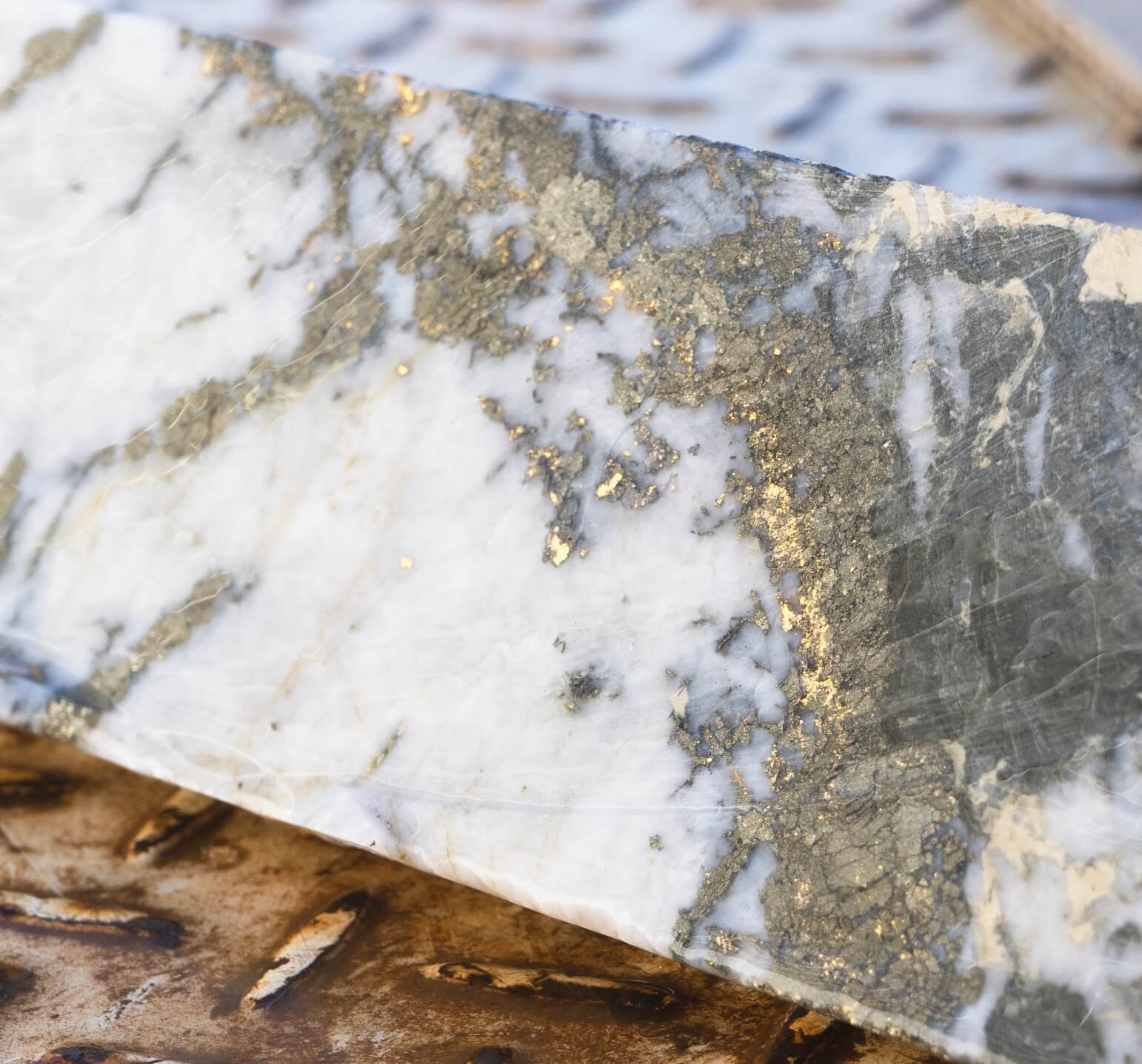 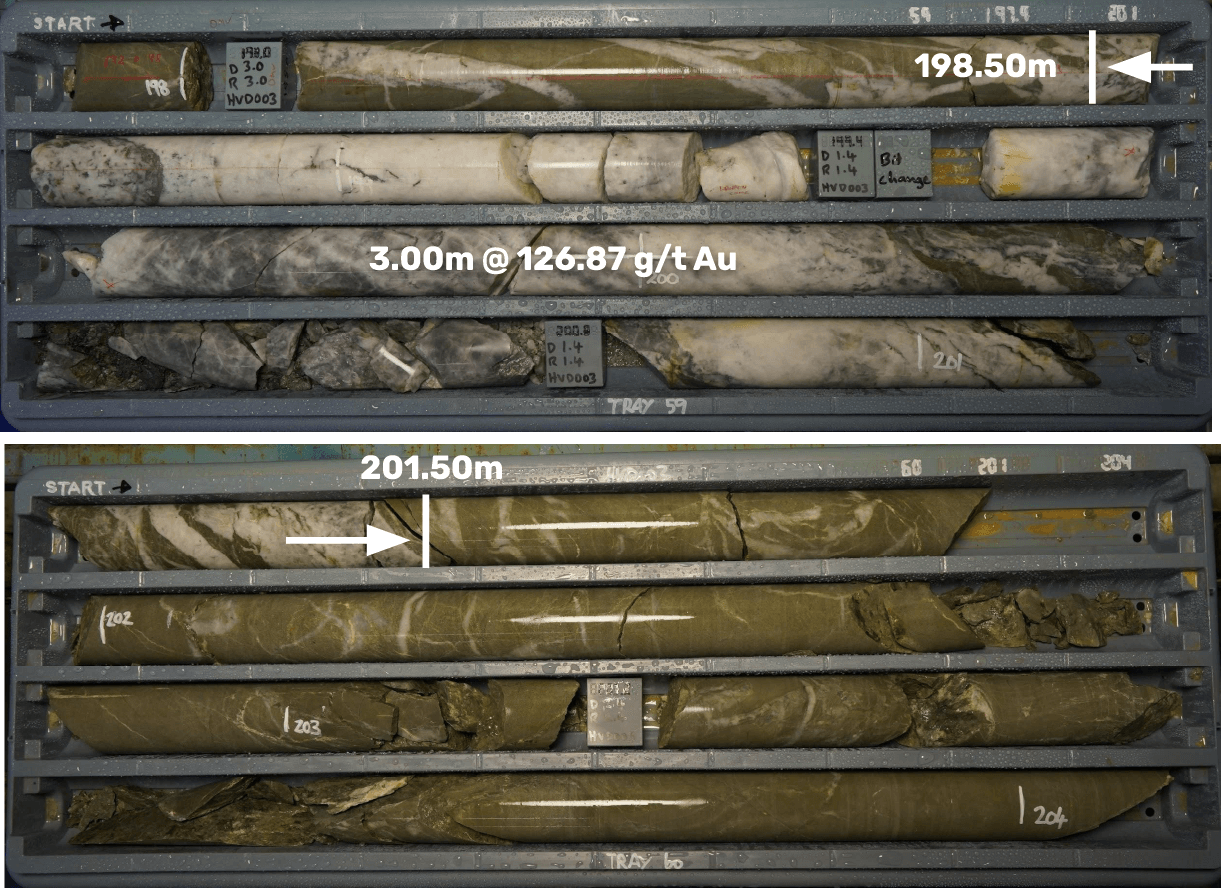 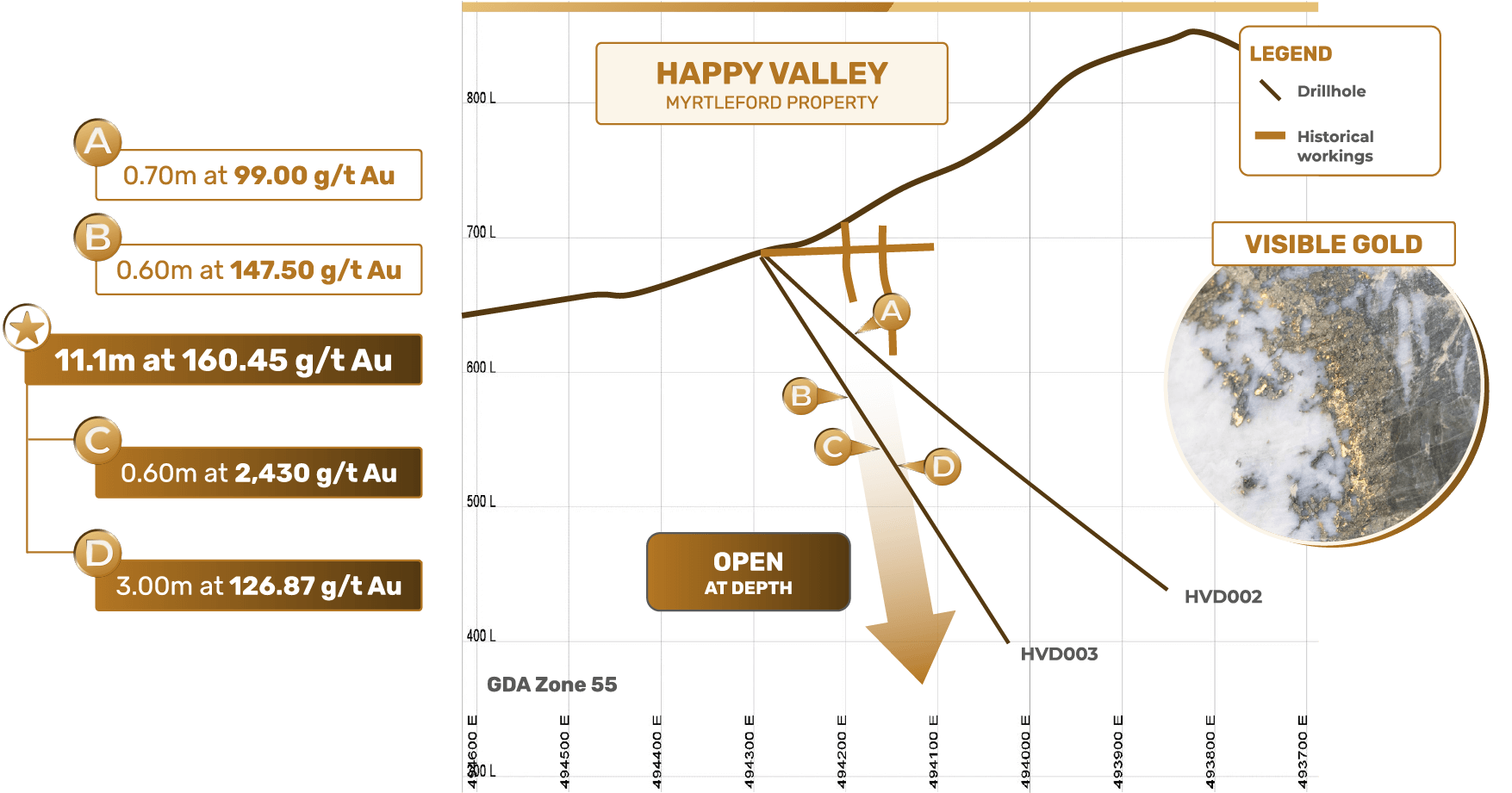 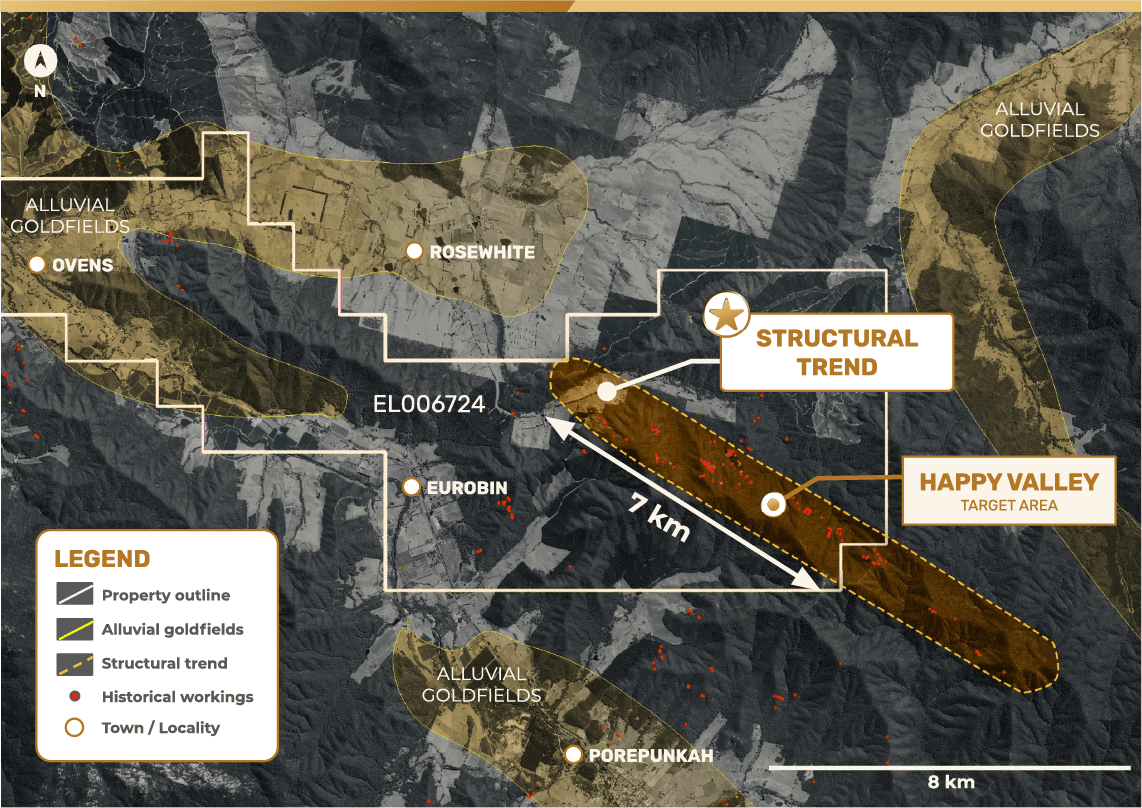 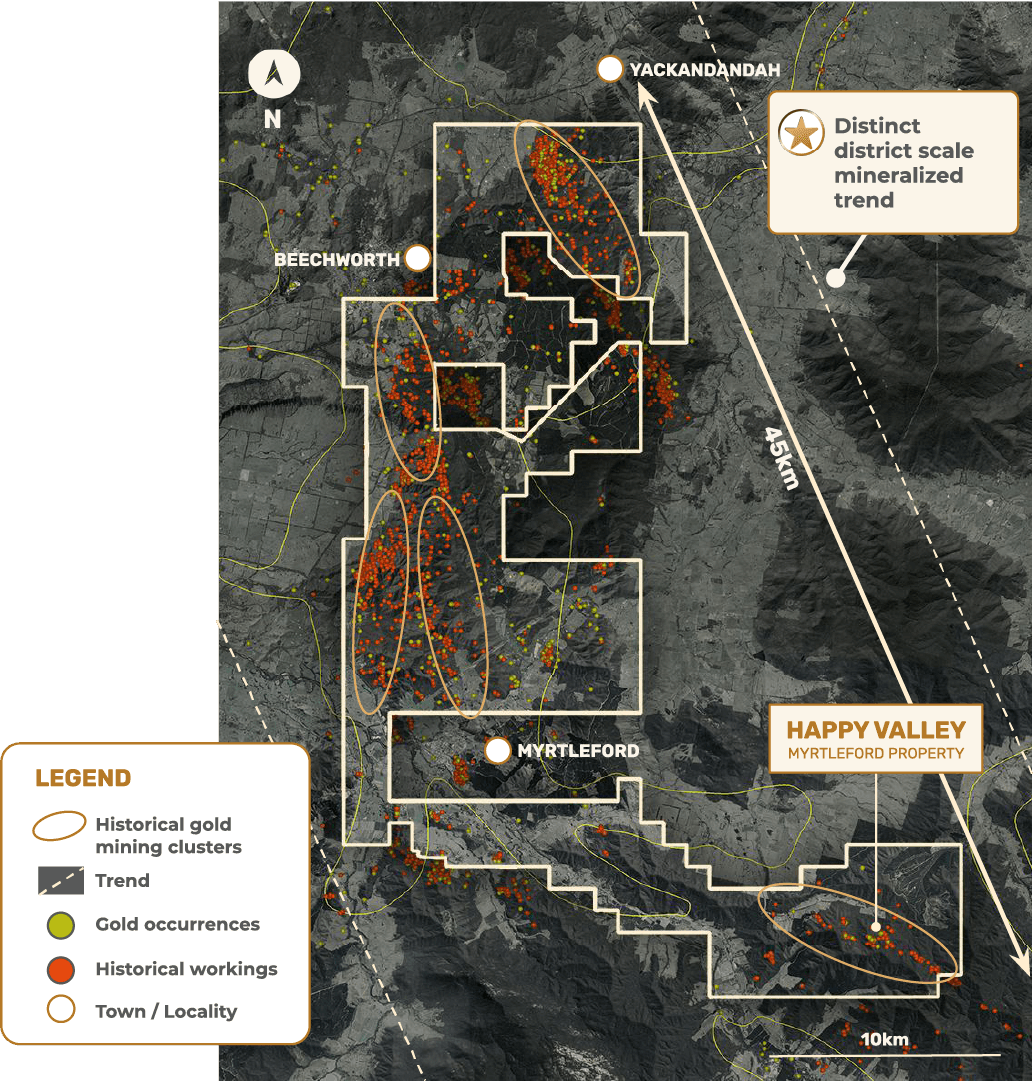 *Coordinates are from drill design. Not yet surveyed.