Vancouver, B.C., August 9, 2021. E79 Resources Corp. (CSE: ESNR, OTCQB: ESVNF) (“E79” or the “Company”) is pleased to report that all remaining assay results have now been received from holes HVD002 and HVD003 from the first round of exploration drilling and that the Company has initiated a follow up drilling program at the Happy Valley Gold Prospect on its Myrtleford property in Victoria, Australia.

Rory Quinn, E79’s President and Chief Executive Officer stated, “We are pleased to report that all outstanding assay results have now been received for HVD002 and HVD003. Undertaking multiple analytical methods and arriving at very similar grade results, indicates that published assay values are repeatable.

With the completion of the first phase of drilling at Beaufort, the drill rig has been remobilized back to Happy Valley to undertake a second round of drilling to confirm the strength of earlier results, test for strike and depth extensions of the bonanza grade gold mineralization, and to build on the Company’s understanding of the structural controls on the mineralization.

Drilling is designed to test for continuity of mineralization around earlier spectacular intersections, in particular 11.50m @ 160.44 g/t gold.”

The company has now relocated the diamond drill rig from Beaufort back to the Happy Valley Prospect in order to follow-up on the earlier results from the first phase of exploration drilling. Additional holes are planned to test the consistency and the down-dip extensions of mineralization encountered earlier and will be drilled along the same sectional alignment as the earlier HVD002 and HVD003 holes (Figures 1 and 2). 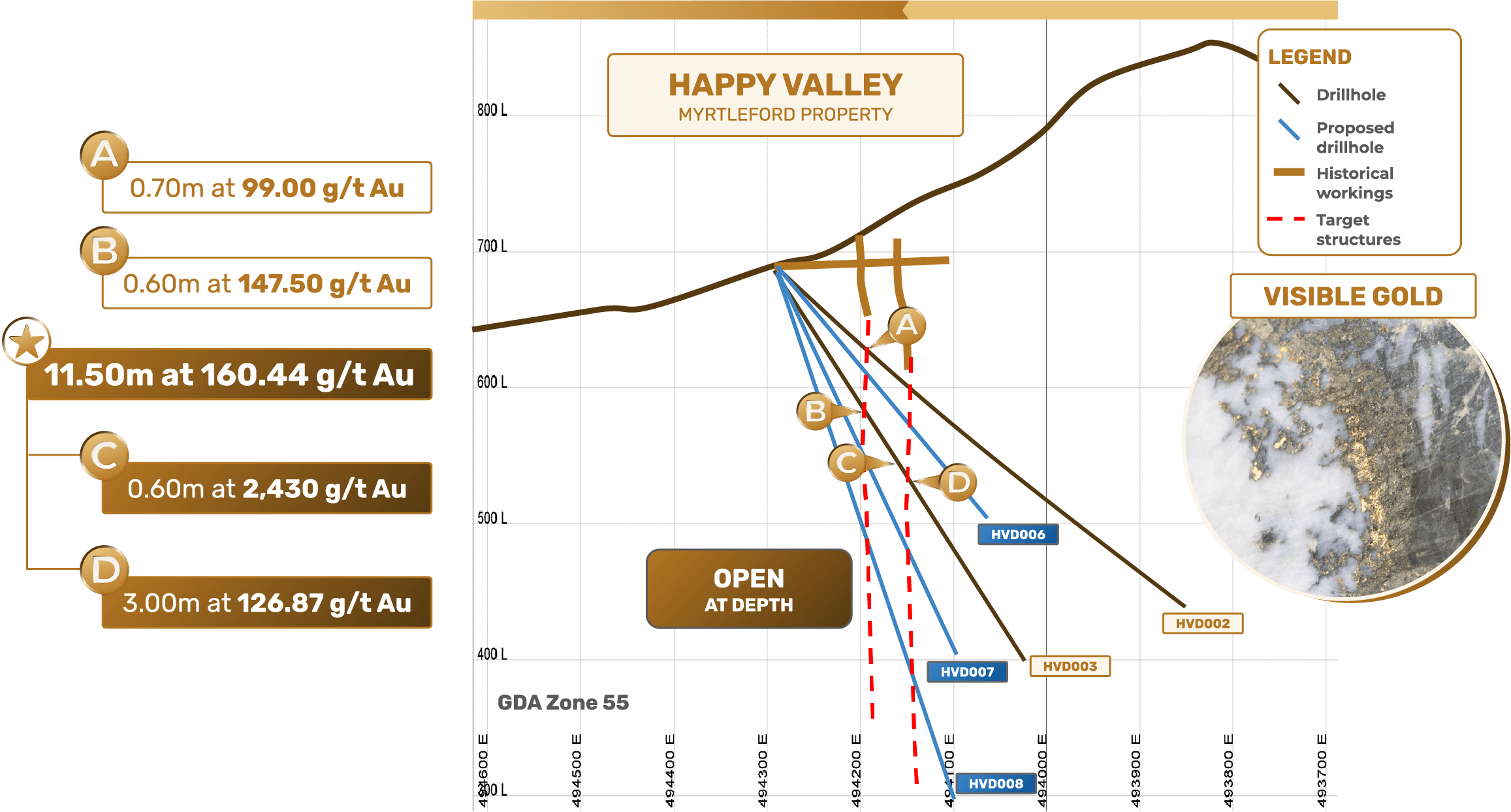 Further analytical assay results have confirmed the exceptionally high tenor of visible gold and other mineralized zones identified in drill core from the first phase of diamond drilling at the Happy Valley Prospect.

The results received confirm the Company’s belief that high-grade gold mineralization exists at depth below historical gold mining areas. The current program has generated structural, lithological, alteration and geochemical information to understand the gold mineralization at the Happy Valley Mining Center. This knowledge will be used in modelling for targeting additional drilling along strike and in the broader model for the Company’s Myrtleford prospects.

Drill hole HDV003 was drilled at a dip of -55°, (16° steeper than HVD002), and on the same azimuth as HVD002 (216° mag, 228° Grid). The drill hole intersected two zones of quartz containing both sulphides and significant gold. All intersections represent downhole lengths and as such do not represent true width intersections.

The mineralization intersected to date occurs within a broad zone of altered sediments consisting of a mixture of slates, siltstones and sandstones of variable thickness, loosely termed the ‘mine sequence’, however specific favourable beds yet to be identified. Several folds and multiple faults have also been identified from drilling, their effects and controls on the gold mineralization is also yet to be fully understood. Outside of the ‘mine sequence’ the geology changes to a predominantly sandstone lithology.

Additional drilling is planned to not only expand known mineralization, but also to assist in improving the understanding that the lithologies and faulting play in controlling the gold mineralization.

All samples were ½ HQ diameter (63.5mm) diamond drill core. Sampling was conducted to geological contacts. The additional core samples were shipped by E79 contractors to ALS Geochemistry in Brisbane, Queensland, Australia by TNT. The samples were crushed to a nominal 85% passing 3.15 mm. A 1 kg split was obtained using a Boyd rotary splitter and pulverized in its entirety to a nominal 85% <75 mm All reported samples were analysed by 50g fire assay with an atomic absorption finish (Au-AA26) with an upper detection limit of 100 ppm. Mineralized samples were also analysed for Ag, As, Bi, Cu, Pb, Sb and Zn following an aqua regia digestion and inductively-coupled plasma (ICP) instrumental finishes. A further selection of samples has been analysed for a full multi-element suite using ICP mass spectrometry (ICP-MS) following a 4-acid digestion and by hyperspectral methods to determine alteration mineralogy. Data quality was monitored using certified reference materials (CRM), coarse blanks inserted into the sample stream, and duplicate analyses.

Leachwell analyses on 500g samples followed by 50g fire assay analysis of the leach tails confirm the previously reported 50g fire assays results for all samples with gold grades >100g/t. Further, the Leachwell results indicate that >99% of all gold in these samples is free and amenable to conventional metallurgical processing. Screened metallic results for 500g samples reporting >100g/t gold using a 75mm screen are 7% to 42% lower than the original 50g fire assay and Leachwell results, but confirm the high tenor of the original results. The +75mm size fraction was fired to extinction and the -75mm fraction was analysed in duplicate using a 50g fire assay.

The Happy Valley Prospect is situated in the south eastern portion of the Company’s Exploration Licence EL006724 in Victoria, Australia (Figure 3). It lies within a 7km long northwest trend of historical workings. The Happy Valley Mining Center has a documented historical production of 34,200 ounces of gold predominantly between 1866 – 1875 and produced at an average grade of ~31g/t gold, which presents E79 with an extremely attractive target. To date, only limited modern exploration has been conducted at this prospect.

Gold mineralization at Happy Valley occurs as quartz infill fractures and spurry formations within carbonate altered sedimentary units of Lower Ordovician age (485 – 470Ma). Regionally, mineralization appears to be proximal and related to the emplacement of several major regional Devonian age granitic plutons. The gold can occur as free particles within the quartz veins and is also associated with sulphides, including pyrite and, to lesser degrees, arsenopyrite and galena. 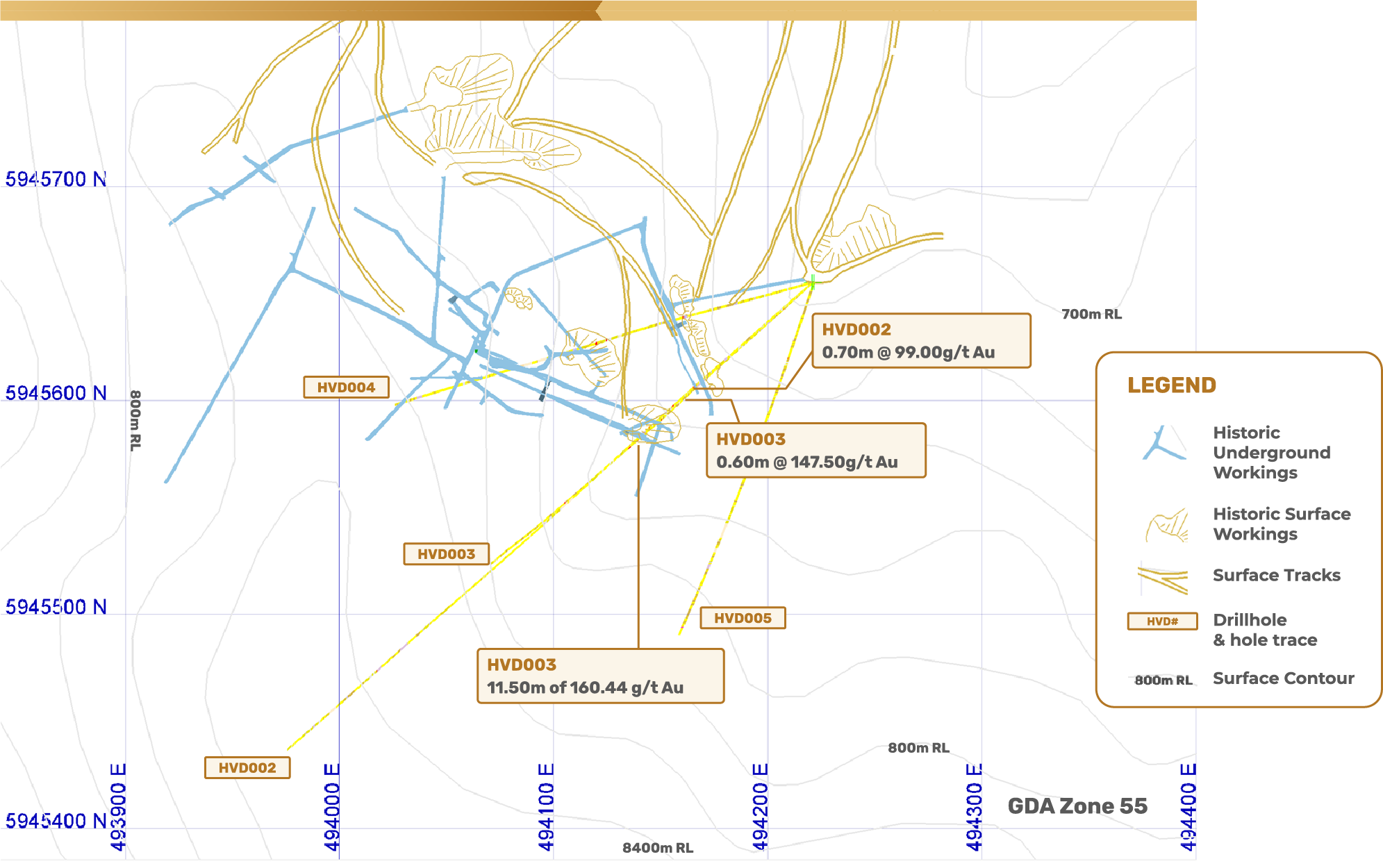 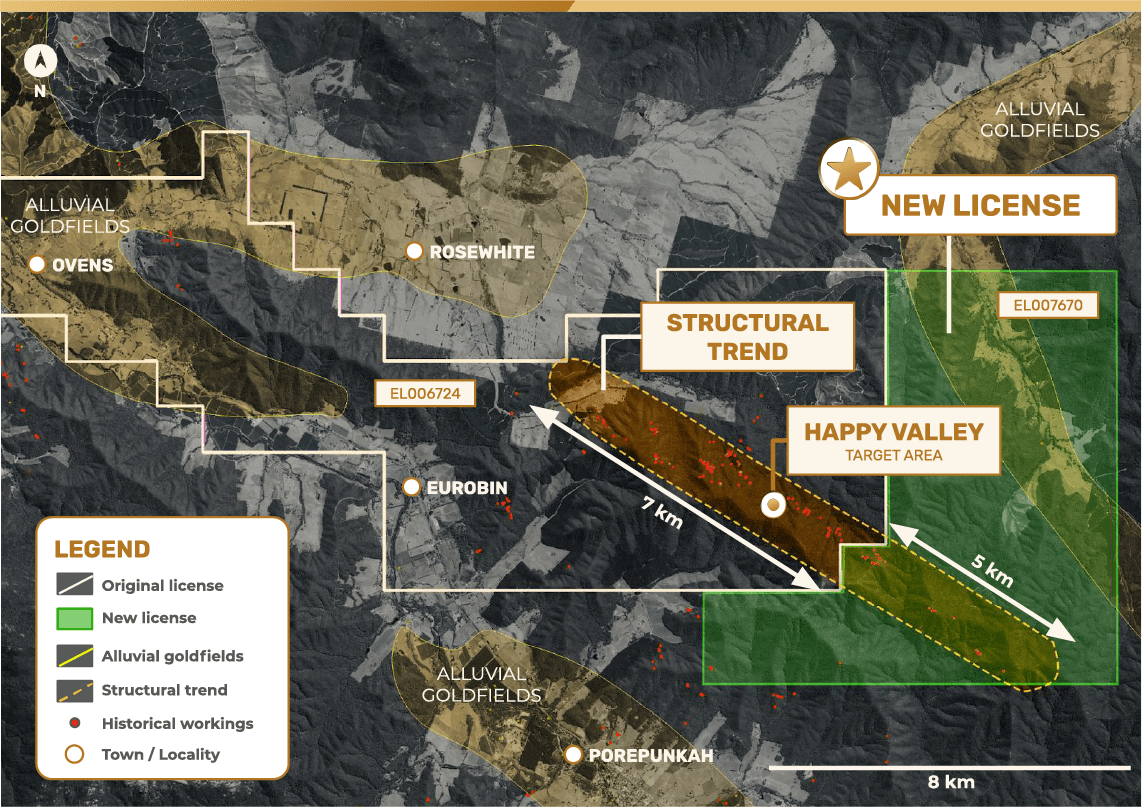 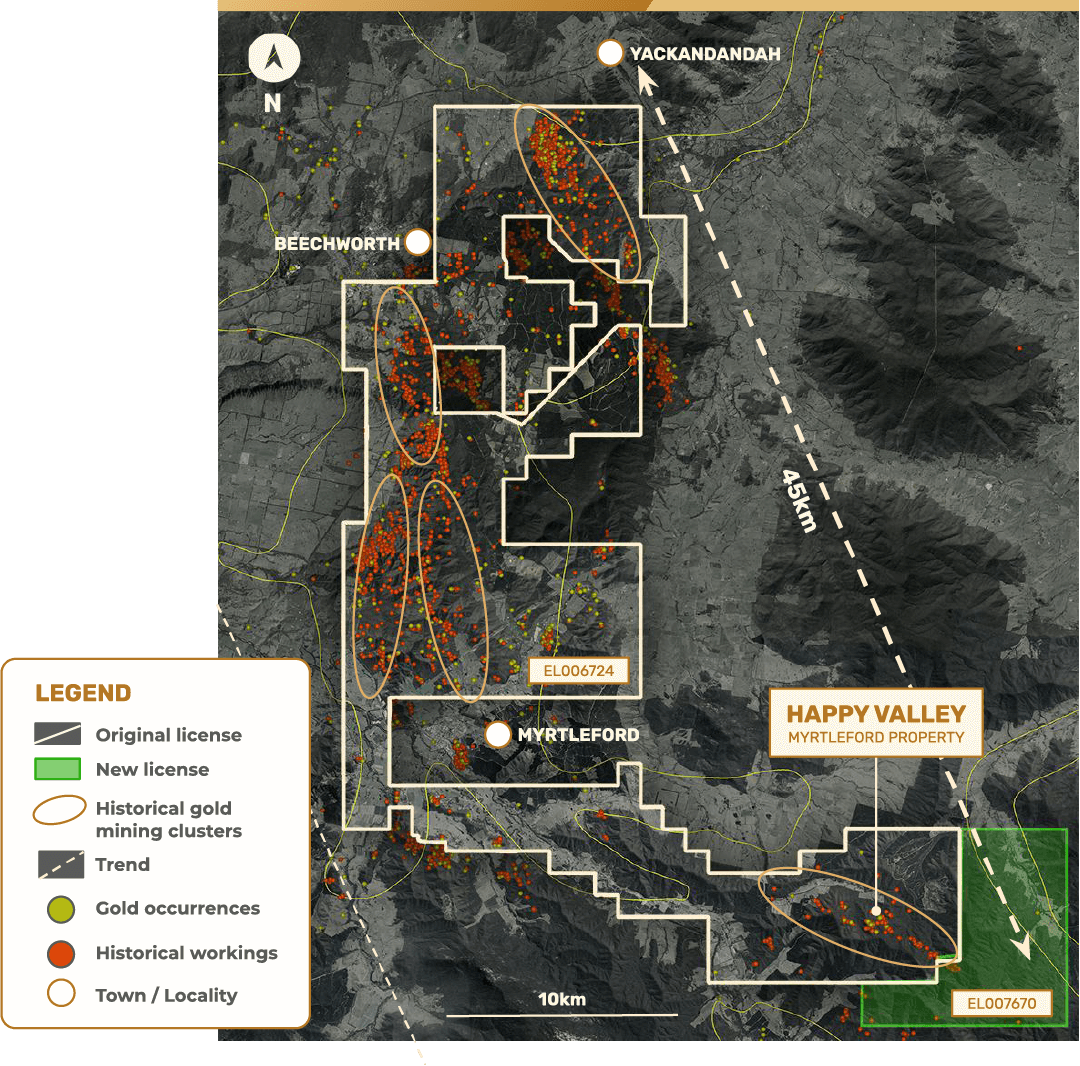 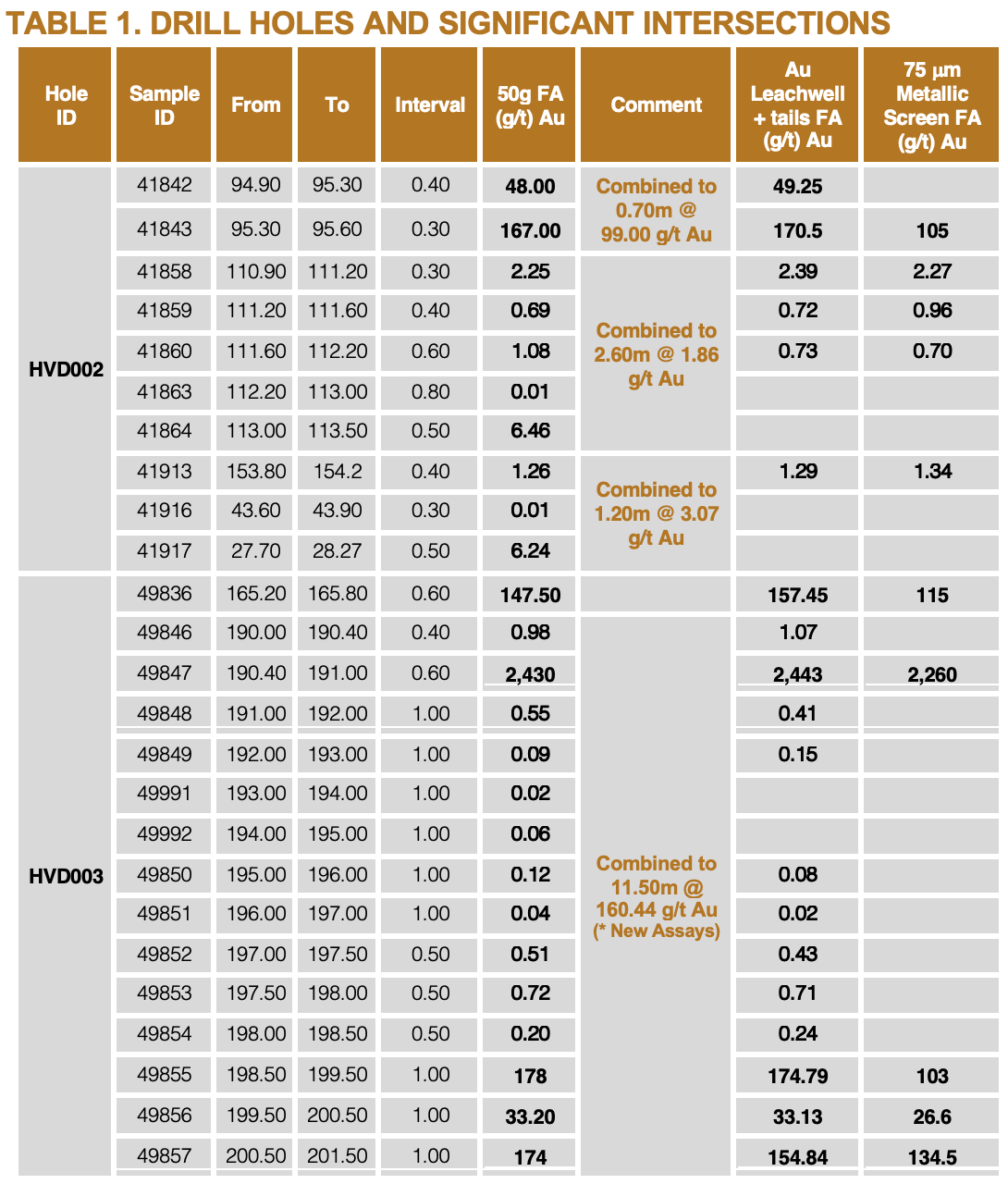 E79 Resources is focused on exploring for Fosterville-type mineralization at its Beaufort and Myrtleford properties in the Victorian Goldfields, Australia. At Beaufort, an opportunity exists to explore for a hard rock source of a major alluvial goldfield along a structure that is known to host gold in the region. The Myrtleford property represents the consolidation of an entire historic gold camp with over 70 past producing gold mines on the property, where the bulk of historic mining stopped at the water table. The Company continues to evaluate corporate development opportunities in the underexplored and historically prolific Victorian Goldfields.