A new intersection (5.35m @ 32.07 g/t Au including 1m @ 78.4 g/t) in HVD007 may represent a discovery of a completely new zone of mineralisation, as it resides outside of the known reef structures. This new zone will be tested with further drilling. It is known that two of the major Reefs mined historically; the New Happy Valley and Porepunkah Reefs, did not outcrop on surface and were only discovered during tunnelling, so the presence of buried, or a ‘blind’ reef, containing significant gold values is an exciting discovery that may lead to further mineralisation outside of the current target zone.

These results continue to confirm the concept that high-grade gold mineralization extends to depth below historic gold mining areas – where majority of historical mines terminated at shallow depths associated with the ground water levels. The current program continues to generate structural, lithological, alteration and geochemical information to determine their relationship to gold mineralization at the Happy Valley Mining Centre. The Company is currently looking to expand the envelope of mineralisation along strike and down dip with further drilling at Happy Valley. Mapping and rock chip sampling is in progress along strike from Happy Valley to identify further drill targets along the 12km long Happy Valley Corridor. This information will provide a model for exploration on the Company’s Myrtleford prospects.

The Happy Valley Prospect is situated in the south eastern portion of the Company’s Exploration Licence EL006724 in Victoria, Australia (Figure 5). It lies within a 12km long trend of historical workings mines. The Happy Valley Mining Centre has a documented historical production of 34,200 ounces of gold predominantly between 1866 – 1875. The Happy Valley Mining Centre produced at an average grade of ~31g/t Au. To date, only limited modern exploration has been conducted at this prospect, with the recent drilling by E79 defining bonanza grade mineralisation at depth.

Gold mineralization at Happy Valley occurs as quartz veins within carbonate altered sedimentary units of Lower Ordovician age (448 – 443MA). Regionally mineralization appears to be proximal and related to the emplacement of several major regional Devonian age granitic plutons. The gold can occur as free particles within the quartz veins and can also be associated with sulphides, including pyrite and to lesser degrees arsenopyrite and galena.

Drill holes HDV006 and HVD007 were drilled at inclinations of -48° and -60° respectively, and on a similar azimuth to HVD002 and HVD003 (~216° mag, 228° Grid). The holes have intersected multiple zones of quartz containing both sulphides and, in some places, visible gold. All intersections represent downhole lengths and as such do not represent true width intersections. Historic mining operations were undertaken on subvertical steeply dipping quartz vein structures (Figures 1, 2, 3 and 4) 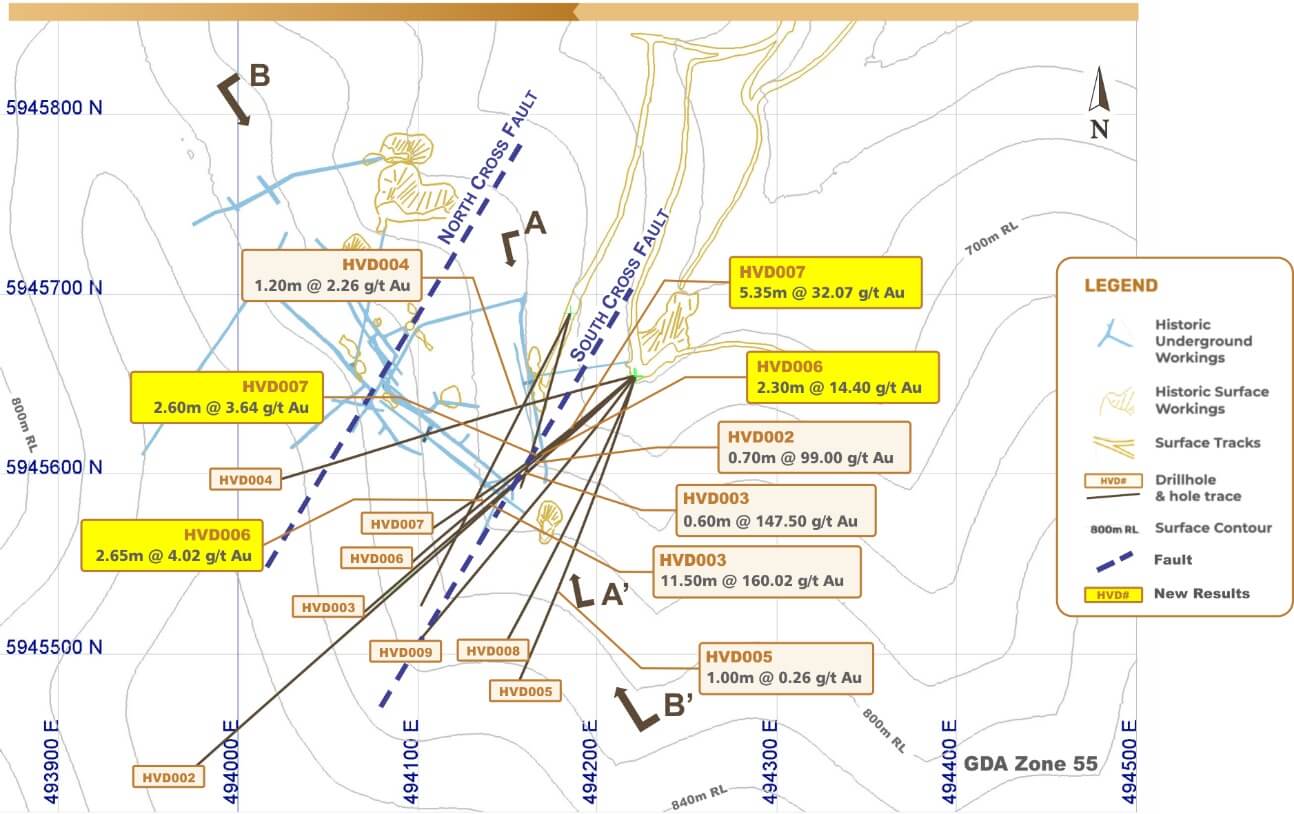 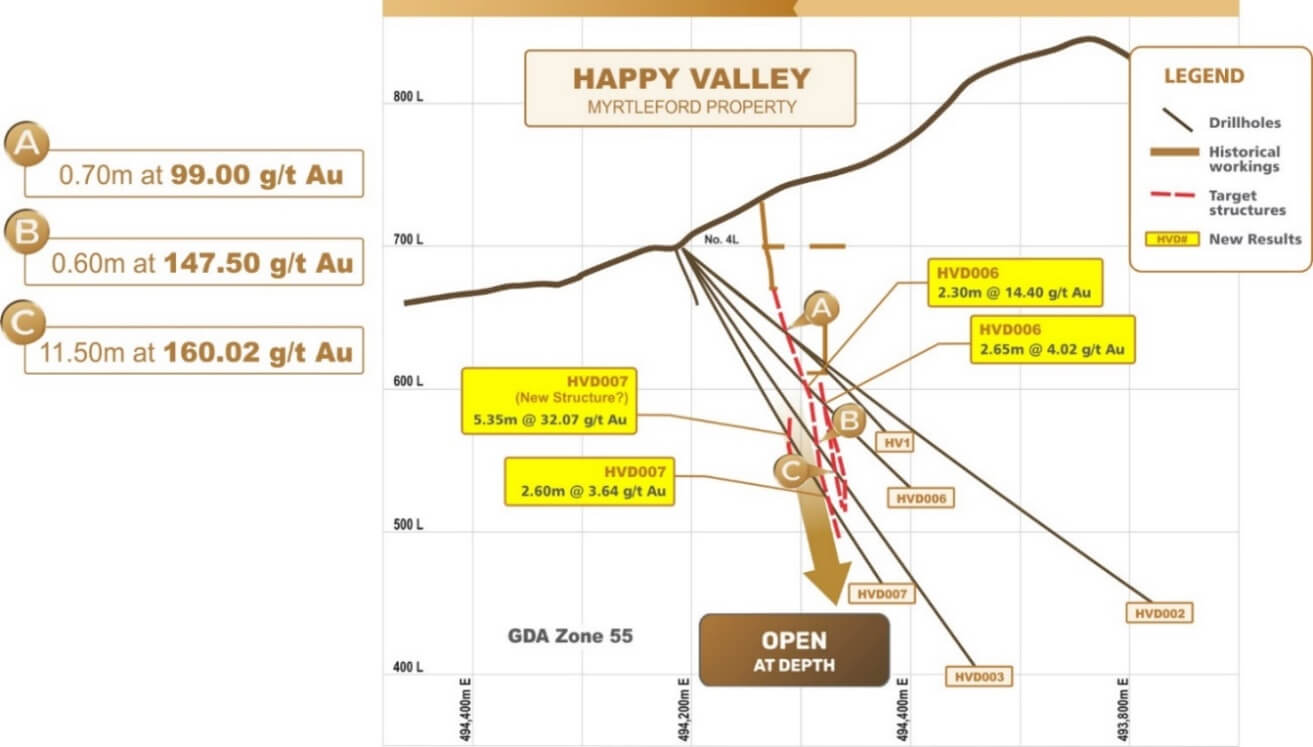 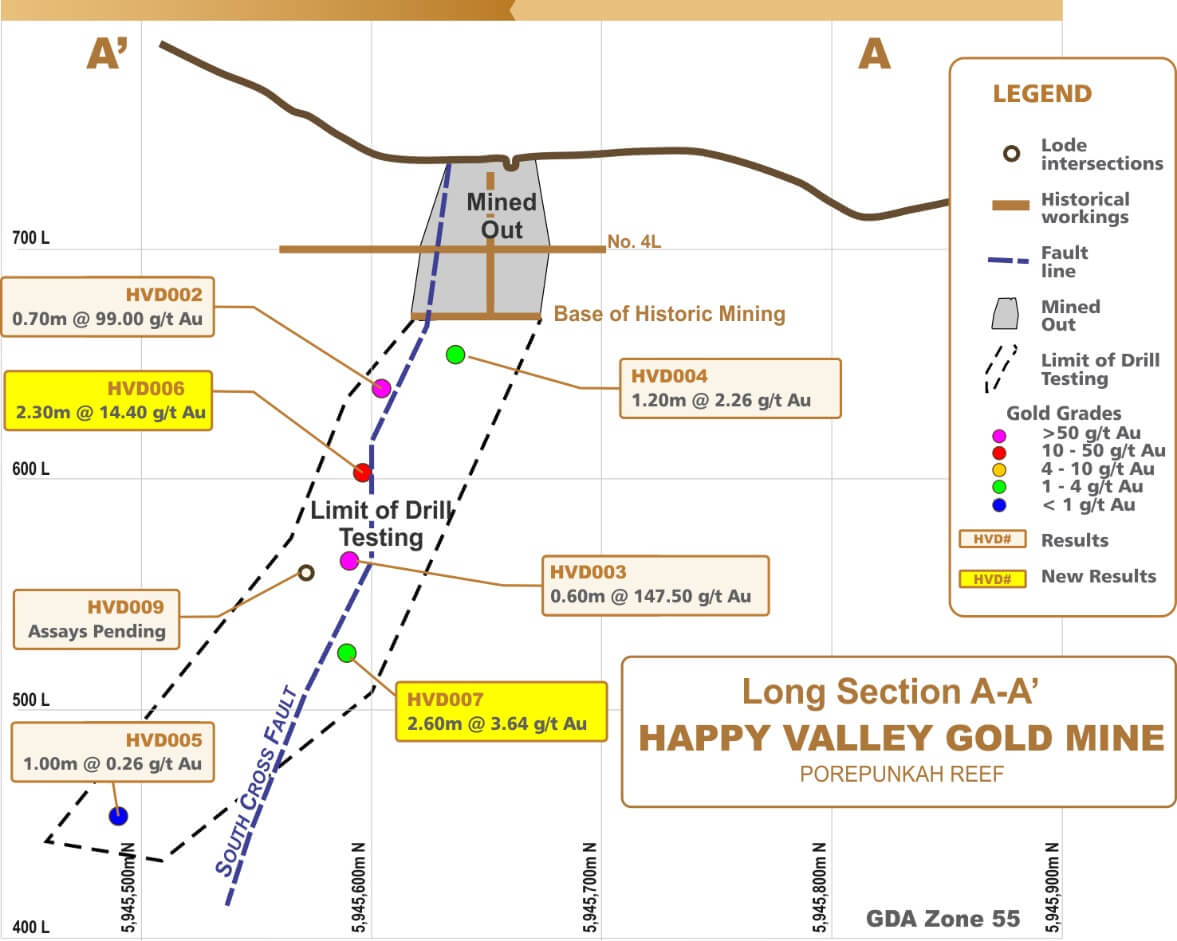 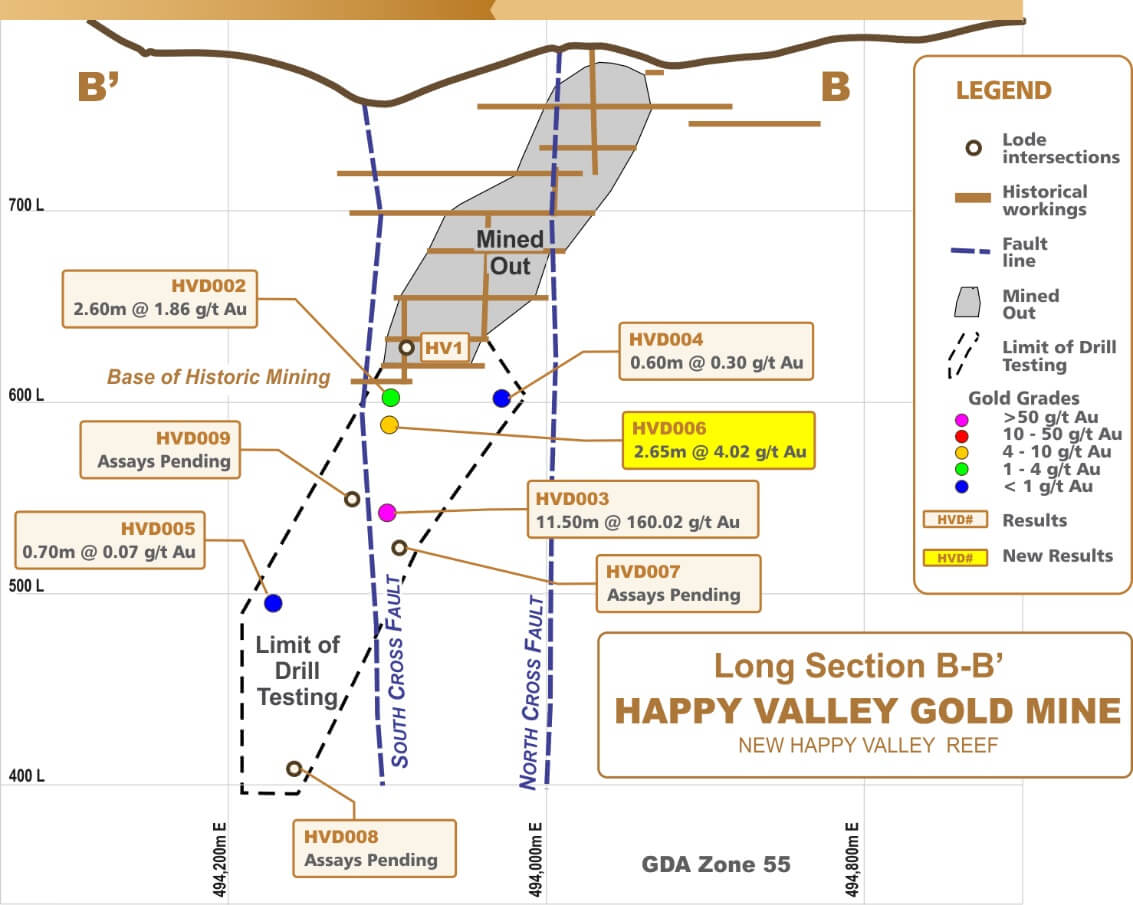 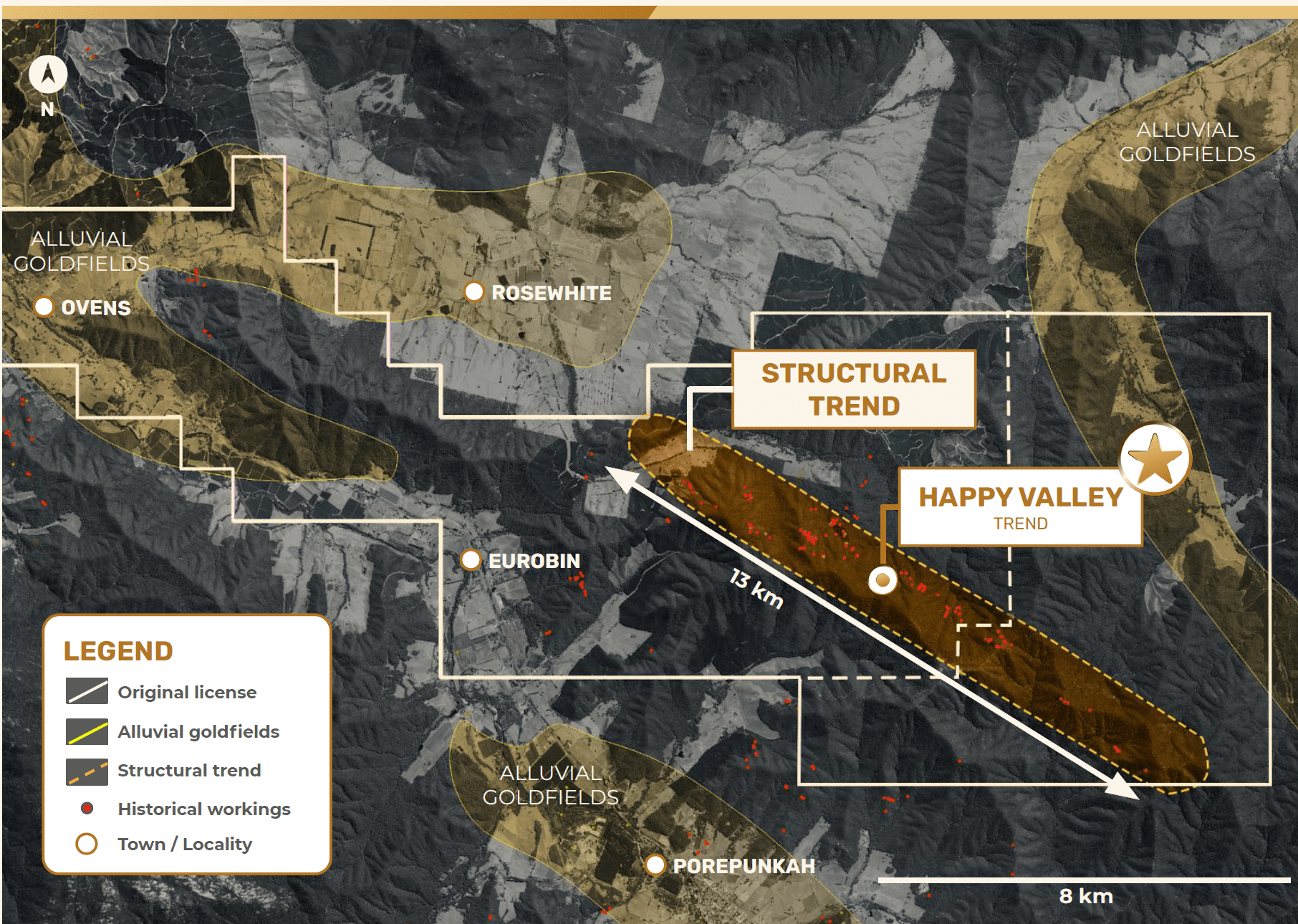 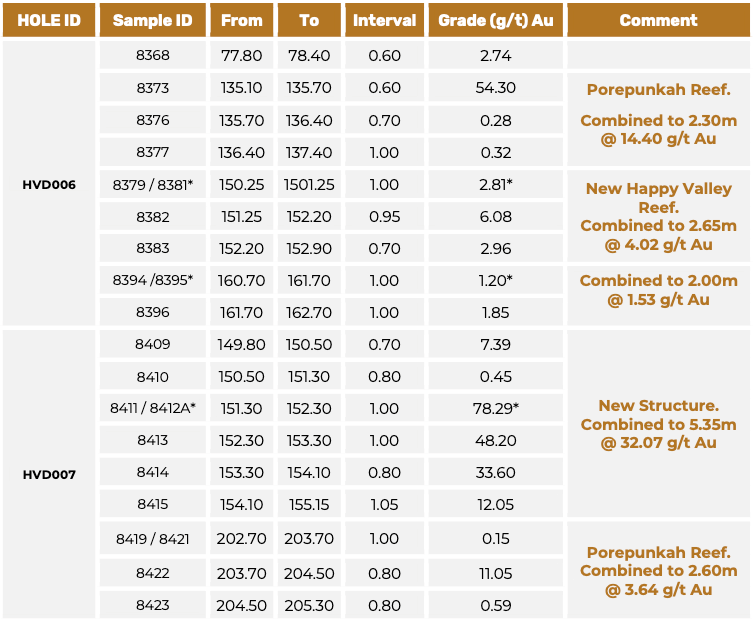 *Quarter Core with Field Duplicates taken. Grade is Weighted Average of both Samples.

*Coordinates are from drill design. Collar position not yet surveyed.

All samples are ½ HQ diameter (63.5mm) diamond drill core. Where visible gold has been observed in the core a field duplicate sample has been taken by splitting the ½ core in half again (¼ core) with both samples being independently assayed and the combined weighted average given to the interval.   Sampling was conducted to geological contacts. Samples were shipped by E79 contractors to ALS Global in Orange, NSW, Australia by TNT. The samples were crushed to a nominal 85% passing 3.15 mm. A 1 kg split was obtained using a Boyd rotary splitter and pulverized in its entirety to a nominal 85% <75 mm. Two quartz washes were run through both the crushing and pulverizing equipment between all samples and sizing tests were performed on both the coarse crush and pulverized material. All samples were analysed by 50-gram fire assay with an atomic absorption finish (Au-AA26). This method has an upper detection limit of 100 ppm. Over-range samples were analysed by a second 50g fire assay using a gravimetric finish with an upper detection limit of 10,000 ppm (Au-GRA22). Certified reference materials (CRM) and coarse quartz blanks were also submitted with the samples to monitor accuracy and possible cross contamination, respectively. The results for all quality control samples lie within acceptable limits.

All laboratory results, including gold fire assays, multi-element geochemistry, and hyperspectral mineralogy, have also now been obtained for the four diamond drill holes drilled at the Central Block at Beaufort EL006454. These holes were designed to test areas of weakly anomalous geochemical response in residual soil samples, as well as inferred structures and geochemically anomalous stratigraphic units. No significant gold assays have been returned. There are zones of weakly anomalous gold, arsenic, and antimony results in line with the soil data, and evidence for hydrothermal alteration typical of central Victorian gold systems. Work is on-going to relate this alteration to specific structures as a guide to further exploration.