Highlights of the recent drill hole (HVD010) include:

“E79 Resources is extremely pleased with the additional wide intercept quartz and quartz-sulphide zones with intervals of visible gold and sulphides. While assays for the zones are pending, the visual results confirm that the mineralised system continues at depth, with a vertical extend of at least 360m from the surface. These broad intercepts of quartz and sulphide veining also provide encouragement that the mineralised system may be larger than the expression mapped out at surface”.

Mineralisation is initially encountered approximately 50m above the projected position of the interpreted Porepunkah Reef in HVD008, at a vertical depth of 360m from the surface exposure of the workings (Figure 2). HVD008, a deeper hole, had encountered only weakly altered sediments and narrow quartz structures however from 296 metres onward HVD010 has intersected a broad zone of intermittent quartz, quartz-sulphide and brittle quartz stringer veins; making up ~35% of the drill core, from 296m to 435m downhole. An intense zone of quartz-sulphides was intersected from 304.5m to 309.8m and contains multiple specs of visible gold in association with sulphides (arsenopyrite, pyrite, minor galena). (Figure 3 & 4).

The company is also pleased to report that it has obtained formal permission to utilise a second drill platform at Happy Valley, which will allow it to step out to further test the zone at depth and obtain higher angles of intercepting the zone.  The drilling at Happy Valley continues to map out the dimensions of the mineralised system, with particular attention to the high-grade zones that are still open in several directions.

The Happy Valley Prospect is situated in the south-eastern portion of the Company’s Exploration Licence EL006724 in Victoria, Australia (Figure 1) and lies within a 12km long trend of historical workings. The Happy Valley Mining Centre has a documented historical production of 34,200 ounces of gold predominantly between 1866 – 1875, which produced at an average grade of ~31g/t Au. These high grades present E79 with an extremely attractive target. To date, only limited modern exploration has been conducted at this prospect.

Gold mineralization at Happy Valley occurs as quartz infill fractures and spurry formations within carbonate altered sedimentary units of Lower Ordovician. Regionally mineralization appears to be proximal and related to the emplacement of several major regional Devonian age granitic plutons. Gold occurs as free particles within the quartz veins and in association with sulphides, including pyrite and to lesser degrees arsenopyrite and galena. The relationship of gold emplacement with pyrrhotite is unknown.

Drill hole HDV010 was drilled at an inclination of -63.1 o and towards 214o (GDA Grid). These intersections represent downhole lengths only and as such do not represent true widths. Historical mining operations were undertaken on subvertical steeply dipping quartz vein structures. Although the geometry of the quartz body intersected in this hole is not clear from this single intersection, the drill core contacts observed are variable and many are low angle (5-20o to core axis) which may indicate that the drill hole is cutting across the veins at a low angle. 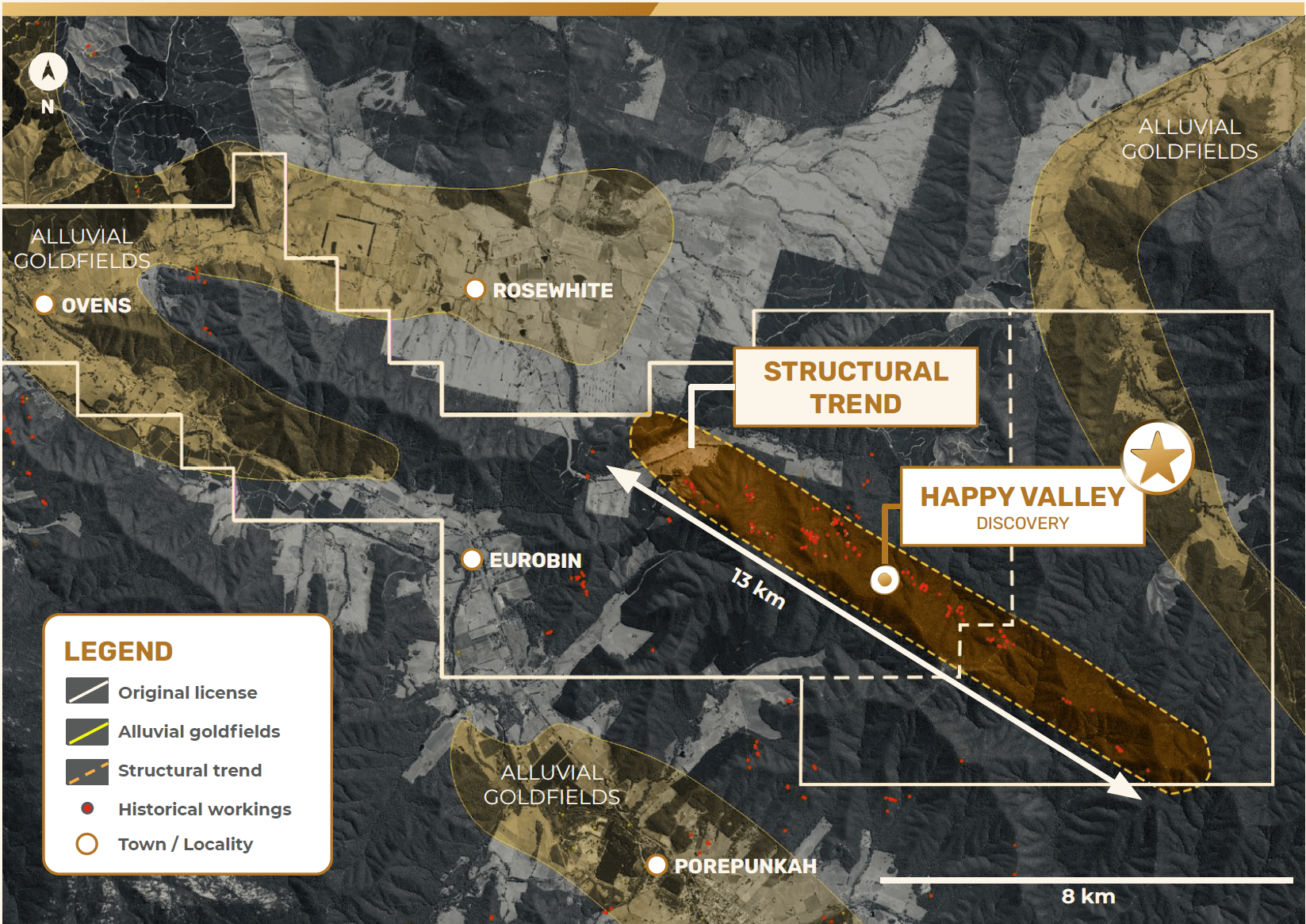 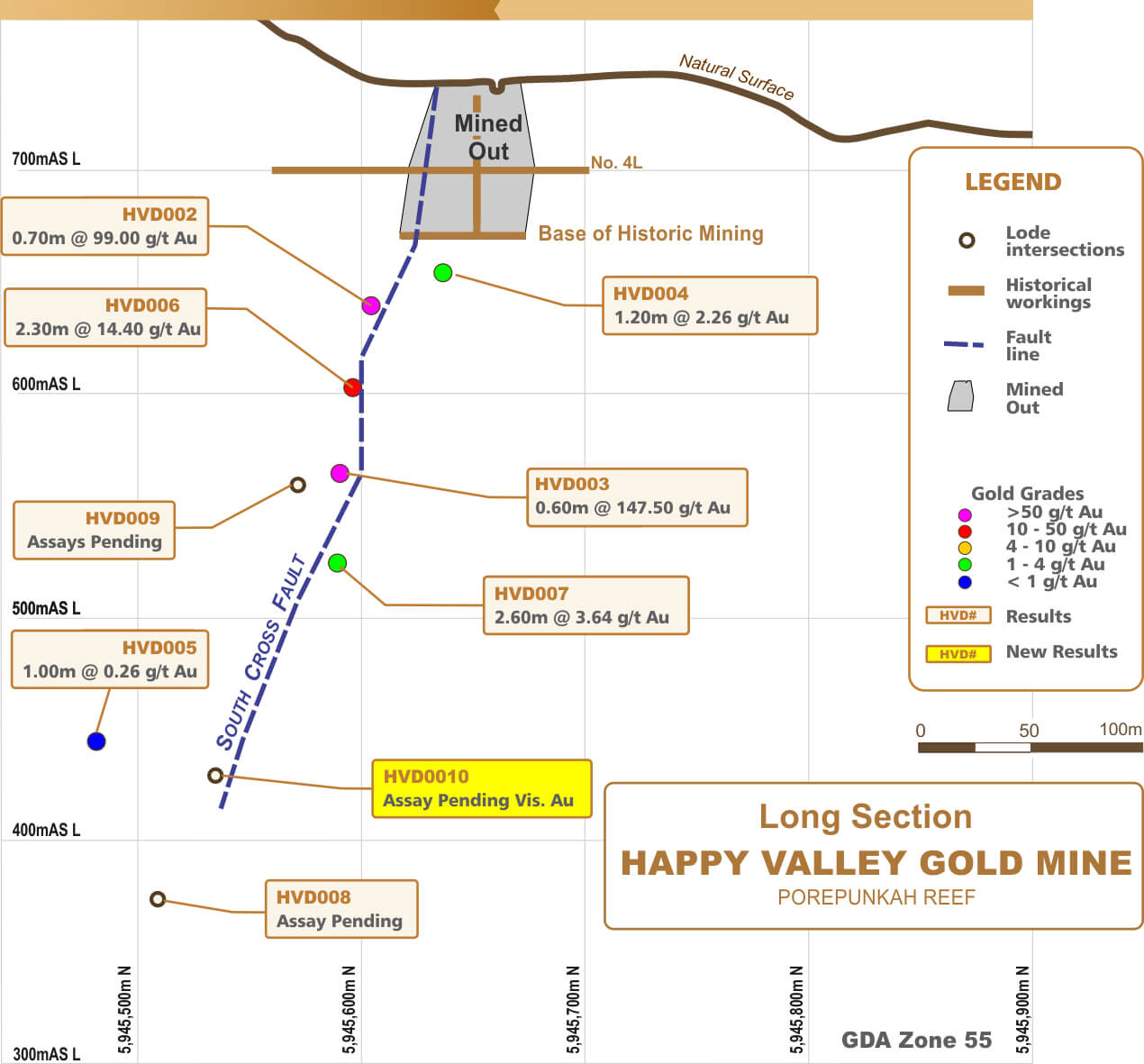 *Coordinates are from drill design. Hole not yet surveyed.