Highlights of the new drillhole results include:

“E79 Resources is extremely pleased with the continuation of high-grade assay results as we drill deeper and step out wider at Happy Valley. These results confirm that the gold system is not only open at depth but open laterally. Coupled with the observation of visible gold from HVD014, the system also appears to be open to the south-east which will be a focus for upcoming drill programs. With drilling continuing to indicate a robust mineralised system at Happy Valley and with new target areas being defined across the license area, management are planning to ramp up the drill program this year, with more rigs being commissioned to the Myrtleford project”.

Drillhole HVD010 intersected a broad zone, from 296m to 435m downhole, of intermittent mineralisation (~35% of interval), containing quartz, quartz-sulphide and brittle quartz stringer veining. An interval within this contained a zone of quartz-sulphide mineralisation in the Porepunkah reef from 304.5m to 309.8m with multiple specks of visible gold in association with arsenopyrite, pyrite and, minor galena. This interval was submitted for analysis and returned 2.5m @ 12.92g/t Au. To date this result is the deepest intersection at 360m below surface and remains open at depth and along strike. The remainder of the broad zone have also been submitted for analysis and assays are pending.

These intersections represent downhole lengths only and as such do not represent true widths. Historical mining operations were undertaken on subvertical steeply dipping quartz vein structures. Although the geometry of the quartz body intersected in HVD010 is not clear, the drill core contacts observed are variable and many are low angle (15-20° to core axis) which may indicate that the drill hole is cutting across the veins at a low angle.

Drill holes HVD013 and HVD014 (assays pending) have been completed to test the upper flank of mineralisation to the south-east of previously reported mineralisation in HVD006 (2.30m @ 40.5g/t Au). Both drill holes passed through favourably mineralised quartz veins with visible gold being observed in HVD014 at a depth of 139.6m.

The Happy Valley Prospect is situated in the south-eastern portion of the Company’s Exploration Licence EL006724 in Victoria, Australia (Figure 1) and lies within a 12km long trend of historical workings. The Happy Valley Mining Centre has a documented historical production of 34,200 ounces of gold predominantly between 1866 – 1875, which produced at an average grade of ~31g/t Au. These high grades present E79 with an extremely attractive target. To date, only limited modern exploration has been conducted at this prospect.

Gold mineralization at Happy Valley occurs as quartz infill fractures and spurry formations within carbonate altered sedimentary units of Lower Ordovician age. Regionally mineralization appears to be proximal and related to the emplacement of several major regional Devonian age granitic plutons. Gold occurs as free particles within the quartz veins and in association with sulphides, including pyrite and to lesser degrees arsenopyrite and galena. 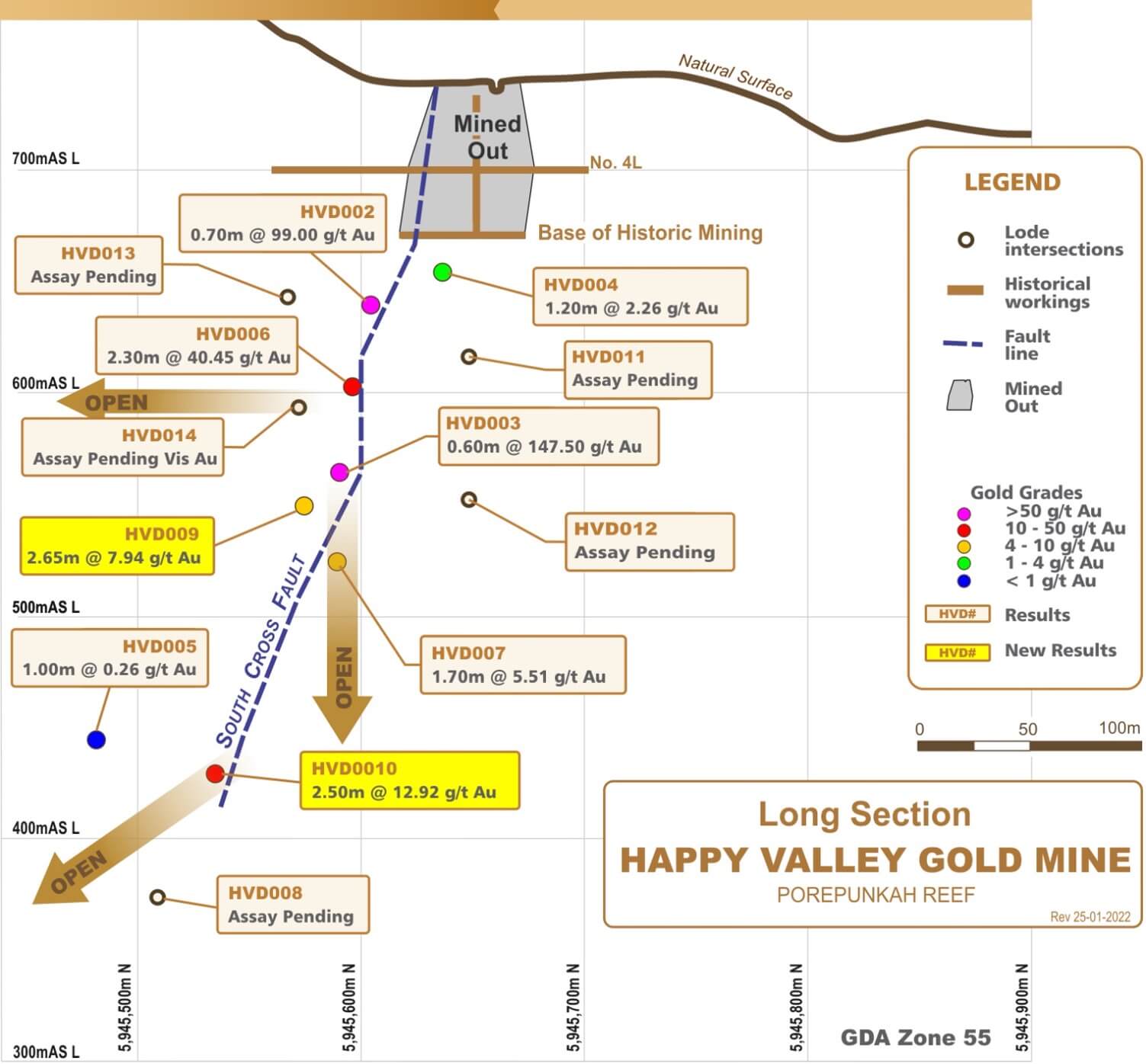 *Coordinates are from drill design. Hole collars not yet surveyed. 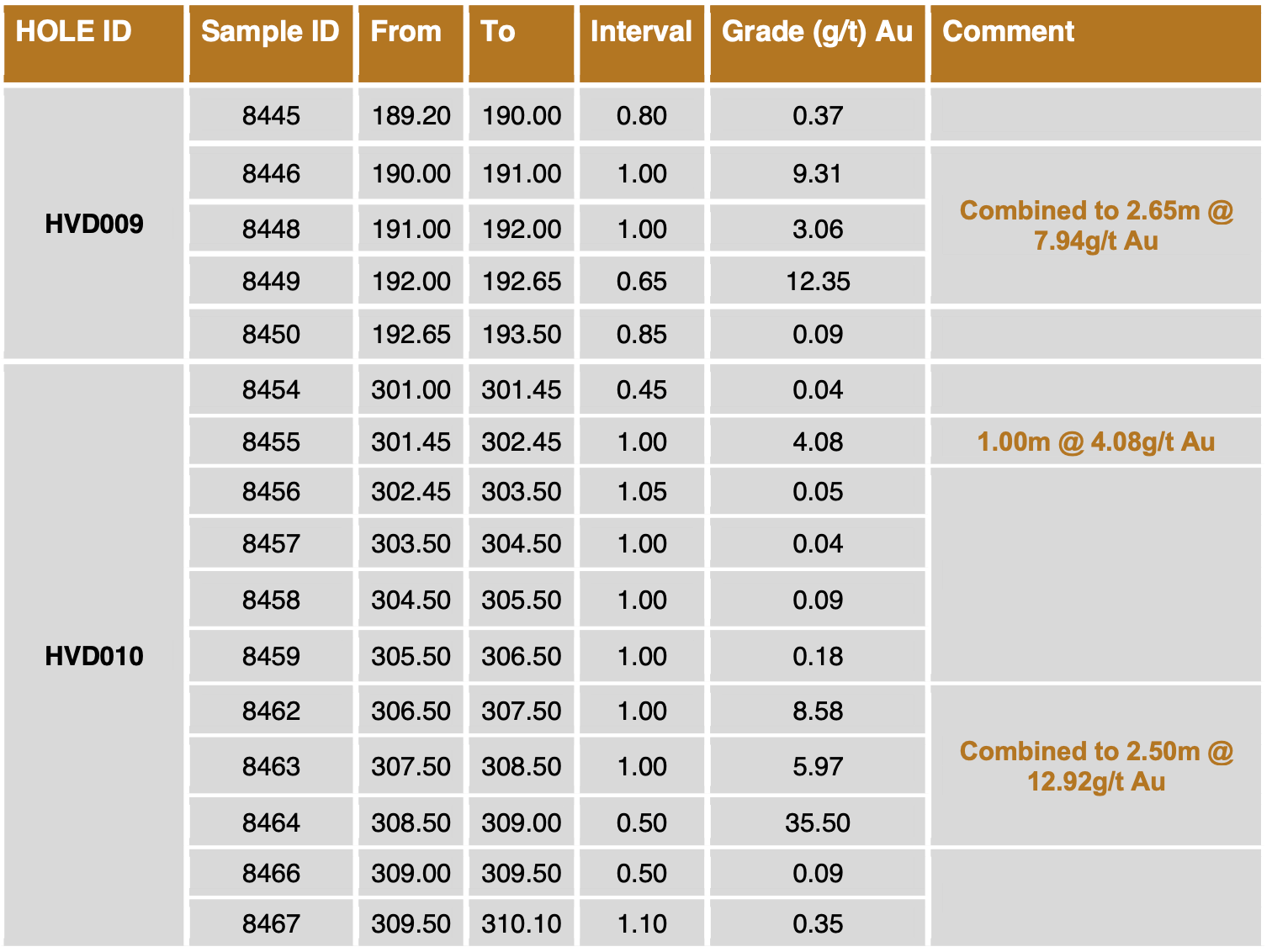 All samples are ½ HQ diameter (63.5mm) diamond drill core. Sampling was conducted to geological contacts. Samples were shipped by E79 contractors to a globally recognised analytical company in Queensland, Australia. The samples were crushed to a nominal 85% passing 3.15 mm. A 1 kg split was obtained using a Boyd rotary splitter and pulverized in its entirety to a nominal 85% <75 µm. Two quartz washes were run through both the crushing and pulverizing equipment between all samples for intersections in which visible gold was noted during logging, and sizing tests were performed on both the coarse crush and pulverized material. All samples were analysed by 50g fire assay with an atomic absorption (AA) finish. Over-range samples >100 ppm Au are re-assayed using a 50g fire assay with a gravimetric finish. In addition, those intersections containing visible Au are also assayed using 1,000g LeachWELL cyanide analysis with the tails being analysed by 50g fire assay with an AA finish, although there is a time lag before the LeachWELL results are available. The sum of the LeachWELL and tails fire assay provides a bulk analysis of the sample, in addition to an indication as to the proportion of Au dissolved in the cyanide leach. Certified reference materials (CRM) and coarse quartz blanks were also submitted with the samples to monitor accuracy and possible cross contamination, respectively. The results for all quality control samples related to the results reported in this release lie within acceptable limits. Note that the CRM results monitor the fire assay data only.

The company is also pleased to report that it has obtained formal permission to utilise a second drill platform at Happy Valley, which will allow it to test structures to ~600m below surface. Core logging and sampling of core continues, the most promising intervals will be despatched to the laboratory on a priority basis. The drilling at Happy Valley continues to map out the dimensions of the mineralised system, with particular attention to the high-grade zones that are still open in several directions.